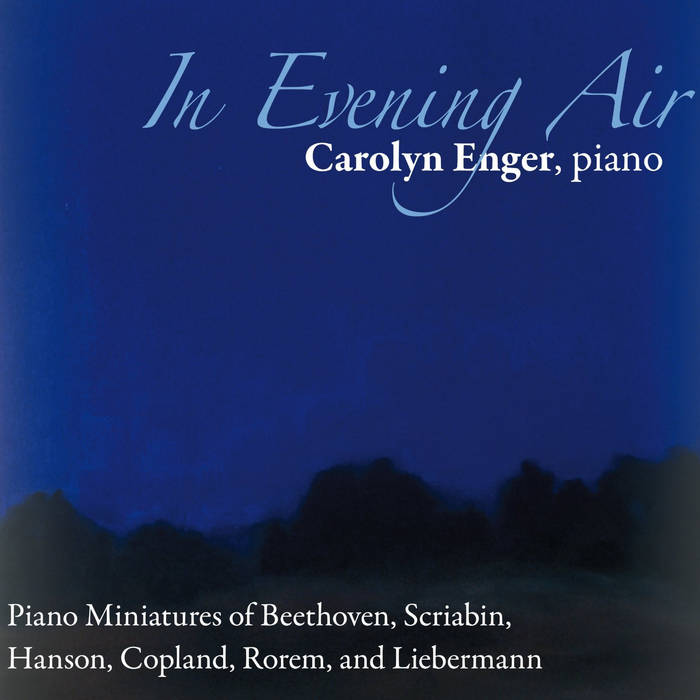 The Art of the Bagatelle The genre of the piano miniature is one of the most personal in the classical repertoire. For composers, these pieces are usually un-commissioned-written between larger projects solely from irrepressible musical desire.

For a pianist, these personal statements provide exquisite challenges and represent a composer's technique at it's most "naked." In several pages (or sometimes only several phrases), a small world must be both created and explored.

For this recording, both familiar and unfamiliar works have been chosen. The pieces are presented in an interleaved manner, grouped so that the pieces inform each other across the decades.

Chronologically, the earliest pieces on the disc are Ludwig van Beethoven's Six Bagatelles, op. 126, one of the composer's final works for the piano. Beethoven commented to his publisher upon delivering the manuscript that he believed them to be "the best he had ever written." By turns delicate, enigmatic, and turbulent, these brief character pieces encapsulate the spirit of Beethoven's ground-breaking late compositions.

Alexander Scriabin produced a large number of pieces for the piano. Though quite different in scope from his famous sonatas, Scriabin's passionate preludes vary in character-from the icy Russian landscape of op. 51, no. 2, to the sunny and radiant colors of op. 11, no. 13.

Howard Hanson was one of the most distinguished American musical figures of the 20th century through his work as composer, conductor, and president of the Eastman School of Music. Though a brilliant pianist himself, Three Miniatures are Hanson's only solo piano compositions in his mature musical style. The rich harmonies and characteristic voicings employed in his beloved orchestral idiom are heard on every page.

Though Aaron Copland produced three career-spanning major works for solo piano (variations, sonata, and fantasy), in his later years he created a few small piano pieces based on earlier sketches and fragments. Several of these pieces are represented here (Midsummer Nocturne, In Evening Air, and Midday Thoughts). Down a Country Lane was written in 1962, when Copland was at the height of his fame as "dean of American composers." It was commissioned by Life Magazine and in a gesture that seems rather remarkable today, the sheet music was printed in the periodical! Sunday Afternoon Music was written in 1935 for an anthology of small pieces by famous American composers.

Throughout his career, Ned Rorem has written small keyboard pieces as gifts for friends. (Carolyn Enger has recorded an entire album of these pieces for future release.) In 2006, he completed a set of one-page pieces entitled Six Friends; each miniature is dedicated to a close friend or family member (including his sister Rosemary and his niece Mary). These pieces represent the spare, lyrical side of Rorem's writing-stark and delicate.

In addition to his active compositional life, Lowell Liebermann is also an exceptional pianist. His Nocturne No. 1 is an early work, composed when he was 25. Liebermann has continued his series of nocturnes, intending eventually to write 21 (the same number as Chopin). As of 2009, he has written 10 of these pieces. Many of Liebermann's works, including this nocturne, feature the developing of searching melodic material over a eerily textured backdrop.

Pianist Carolyn Enger has gained critical acclaim for her lyrical and dynamic playing, her deeply felt interpretations of works from Beethoven and Schubert to contemporary music, and her warm personal approach. Her 2013 release of piano music by Ned Rorem on Naxos Records was selected as one of the “Best in Classical Recordings” by The New York Times. ... more

Bandcamp Daily  your guide to the world of Bandcamp

Exhumed and Gruesome's Matt Harvey checks in, with jams from Cannibal Corpse, Midnight and more